Finnegan had a whirlwind December! After receiving his certificate stating he earned his Grand Champion Bronze a few months prior, he packed up his show lead to head out on the open road with his people. 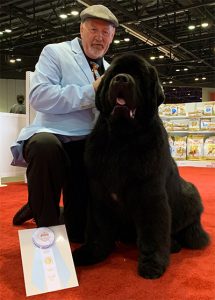 After a wonderful weekend at the supported entry, Finnegan traveled East onto Orlando to the AKC National Championship (Royal Canin) where he was awarded Select Dog out of a beautiful line up of many of the top Newfs in the country. It was a wonderful experience showing in such a large venue with over 5000 dogs, we are super proud of how well he handled himself and very grateful to his handler Michael Brantley for being one of his best buddies and a steady captain at the helm.